Last weekend I had off Friday - Sunday. Friday was a Golden Retriever Specialty with Obedience, Rally, Regular Breed and Puppy and Veterans Sweepstakes. Saturday and Sunday was an all breed Conformation and Obedience and rally show. It was held at the same place which was nice. Usually the Golden Specialty is held in Neenah.

Friday I had Bell entered in Utiliy and Open Obedience and she Q'd in Both. Her Utility run wasn't pretty...Her heeling was kinda crap and she didn't sit on a go out and she futzed around on her glove finish. But her 22nd UDX leg and she did well in Open! Better than she has done in the past.

I was all excited for Saturday cause Bell has been showing progress in her training! I also had Qwik entered in Rally. She is in the middle level now and has to be off leash and focused! Bell NQ'd in Utility cause she took the wrong jump. She was very off and kept looking at the ring steward who was holding her leash. I wanted to beat her lill red butt for being so distracted! She knows better! But she redemmed her self by winning the Open class! I was totally excited. She needed that win for her OTCh. You need 3 wins in addition to 100 points to earn the OTCh title. She also earned 4 more points for winning. I was WAY excited.

Qwik did well in rally too! She would have had a perfect score but she was so focused on me she ran into the jump she was supposed to jump. She lost 10 points for that. I was very pleased with her. It was a distracting building and she kept her focus! YAY for her. 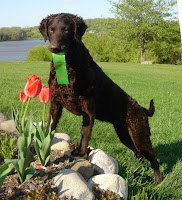 To top off Saturday. Bell ended up taking HIGH IN TRIAL! She had the highest score of any of the other dogs there that day! Talk about cool! The golden Retriever club sponsored a highest scoring golden ribbon too. It was HUGE and cool too. 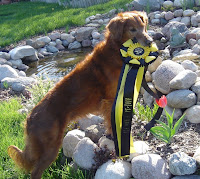 So I was happy on Saturday.

Sunday I was just hoping Bell could do well and behave...Qwik too!
Bell NQ'd in Utility but did a very nice job on everything. She missed the Sit signal. There was this distracting door behind me and I think somone might have come through the door when I was giving the signal. I dono. But everything else was nice! I was pleased with it! Then in Open she did a VERY nice job and ended up in a runoff. I HATE RUNOFFS!!!! I wish I could just forfit them. But sometime the other dog might like sneeze or not sit on a halt or somthing stupid so I just go and try my hardest! I went first for the runoff and Bell did a nice job but had a very wide about turn. Then when the judge called the second dogs # and I saw it was Sandy Ladwig I just kissed it goodbye. Her heeling is flawless. So we eneded up with second place and 1 MORE OTCh point! YAY. I was excited for that. I was just excited to be in a runoff against Sandy! Seriously!

Qwik did really good in Rally also and earned 99 points out of 100! She was a bit more distracted than the first day. But did good. I am hoping to get some more teamwork with her. We just are 100% connected yet. But her score of 99 earned her First place and her second leg. Good girl! 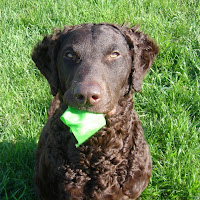 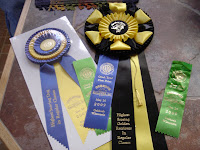 Posted by retrieverluvr at 9:44 PM