Roz from work got married on Saturday at The Kalahari in The Dells. We all went from work. It was a blast! Everything was beautiful. Very unique indead!!! She had Zebra striped bridesmaid dresses and a really neat flower theme. I LOVED the cake! I had some really awesome pictures on my own camera....I transfered them to a cd and it didnt work. I had already deleted the pictures on the camera disk....urggggggg But here are a few from facebook. 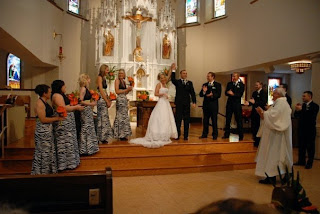 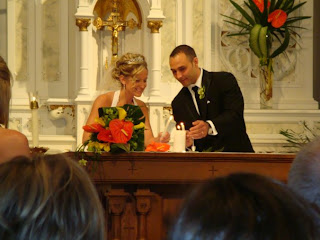 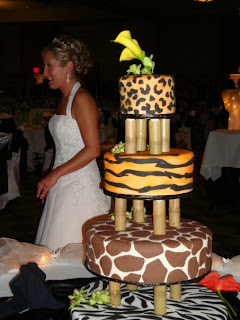 I had planned on staying overnight at the wedding. But there was a UKC/HRC event down at Bong. I just HAD to go! I drove home at night half asleap...then drove down to Bong Half asleap.....yuck

I had Bell entered in Seasoned and Qwik in Started.

Qwik was up first in Started on Land....the BIG TEST!!! She has her started title but wanted to see if my training was doing what I wanted it to. I wanted to make sure she still had the drive and enthusiasm for the game. I have been being harder on her that I was in the past and I wanted to make sure it didn't ruin her drive. I also wanted to see if she would dink around like she did in the past. If she dinked I would know that my training WASN'T doing what I wanted it too. She was perfect. She did everything she needed to and got a nice applause! HURRAY for the confirmation on my training!

Bell was up next in Seasoned on Water...My stumac was ROLLING! I had to pee like 8 times before I ran! CRAZY nervous! It started with a walkup with the bird landing in water about 5 feet in front of you. Bell did PERFECT! Then game the Water blind. This is what she failed on the previous HRC test. It was a simple blind and the dogs could stand in the water. A BIG plus for Bell cause she is uncomfortable treading water. She did GREAT! She even followed the little frog that jumped by the bird on her way out there!!! MY LUCKY DAY!!! Next was a simple double. She did great. SO very proud of the girl. I also did PERFECT on handling the gun! YAY!

Qwik was up next on Water. She did alright. It was real simple. She did screw around a little bit on the first mark. But the second was great. So I knew I had some holes to fill in, in that department.

Bell was up almost last on Land. It was a LONG wait! After the 20th trip to the little girls room.....It wasn't as simple as I had hoped! K now hang with me while I explain it all. First you had a double. The birds were WIDE OPEN! about 180 degrees. So It was kinda confusing for what side you wanted the dog on. You had to sit on a bucket. If you had your dog on your left side...when you would swing to the right you may be blocking your dogs sight or they might not follow you. If they were on your Right you would have to swing INTO them and some dogs will release themselves if you do that to them. Luckily they had the gunners quack to get the dogs attention. Bell was her usuall steady and got the go bird like a champ. The memory bird was a bit tougher. There wasnt much wind. She got almost all the way out when she started to smell the Bird that was planted for the Blind! I was supposed to shoot the gun at a diversion bird when she brought the memory bird back. So i was kinda focusing on the gun and forgot about the Blind bird smell. Bell started to hunt wider and wider and came real close to the blind. I sat her and gave her a BIG over and she took my cast and basically steped on the bird. She came ROARING in and I shot the diversion bird and she brought her bird in and then got the diversion! WHEW!!!! CRAZY!!!!!!

The blind was last and she did great. 3 wistles and she smacked her head on the blind stake. I was laughin at her, the dork. She was like OH there it is! LOL! I was SOOOO proud of the girl. YAY!

So it was a great weekend.
Posted by retrieverluvr at 9:27 PM