We haven't been able to make it to any dock jumping events this year, mainly because of conflicts with other events. It seemed there were a few local events in spring but I was already entered in Obedience or Agility! I had planned on going to a Hunt test in Michigan this weekend. But I missed the closing date. And I didn't know if I wanted to travel that far 2 weekends in the same month. My field trainer Kyle mentioned he was going to have a booth at Racine Fairgrounds and that they had Dock Dogs there! He had free tickets so I entered the girls. Both girls were EXTREMELY excited about it.

I had been playing around at home with them and they LOVE to just run fast and jump.
Bell has been jumping HUGE at home. Everything is over 20 feet and usually her first one is about 25-26 feet. But that's at home. Her own dock and lake. A pool set up is just not the same for her. She jumped well in practice, but her best all weekend was 17.02. She made it into the Amateur Finals and got a pretty ribbon. She was SOOO slow on the dock! She would chase her toy up. But was slow running to me. She had fun anyways! 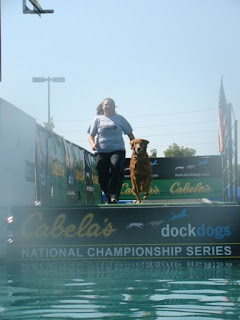 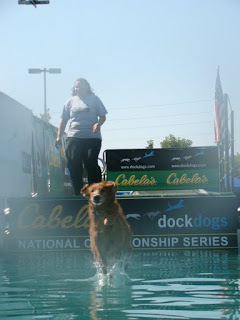 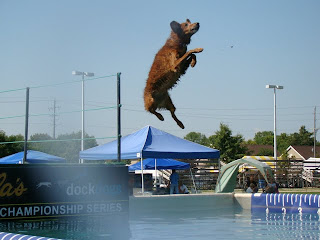 Bell Lookin at her Toy 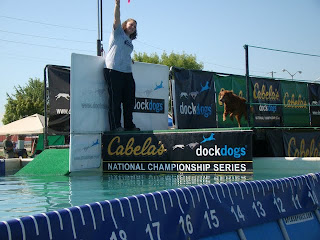 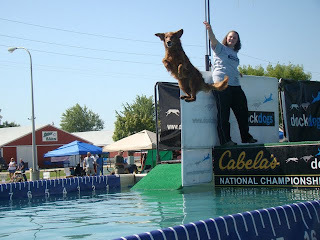 Miss Qwik was SUPER excited. She knows the game now. Waiting in line she is constantly diving at me like "LETS GO NOW!!!" She hates waiting her turn. She does like to watch the dogs go ahead of her. She stands and stares at them when they are waiting. As soon as they go, she goes crazy!!! She was a good little jumper though. She kept leaving early so her distances weren't the greatest. Her best all weekend was a 16.09. She got 2 senior legs towards her title. I think it may have been her title if I remember correctly. We will have to wait and see if DockDogs mails us a Title Certificate. 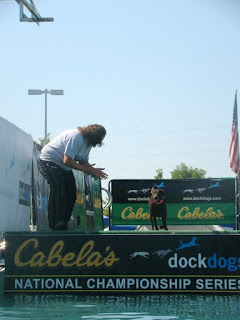 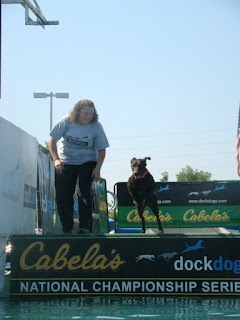 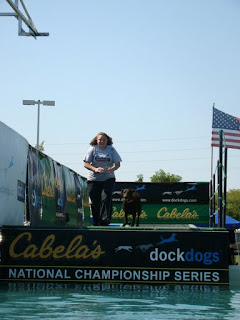 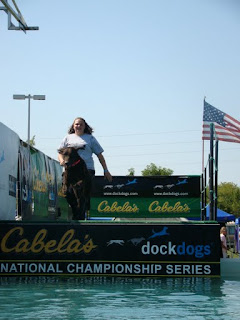 This Racine Sportsman's Fair was supposed to kinda replace the Great Outdoor Festival that was always held in Oshkosh at the EAA grounds. It was small but fun. The local hunt test training club was there and put on a few demos. They had a Speed Retrieve lane and you could run the dogs in it. Both Qwik and Bell did FABULOUS at it and ran it in about 10 seconds. The top time of the weekend was 9 seconds. They also had a bumper scurry. There was 12 bumpers placed among logs and tree branches. You had to stay in this little square and send the dog to get the bumpers. Bell got 11 and the timer ran out when she picked up the 12th one. ALMOST! Qwik got 7 before she lost interest.

I also got to hang out with some cool people!!! Mary S with Nike and Burligh were there. I haven't seen them ALL year! We talked forever and caught up. My friends Andy and Cassie with their Black lab Toby ran him in dock dogs and the speed retrieve. He did really well too! I think next year he will be rockin in Dock jumping. He's still such a silly pup. All the other Dock Doggers that I hadn't seen all year were there. It was a good time! BEAUTIFUL weather to boot!!!
Posted by retrieverluvr at 10:58 AM