This is a few weeks late...But I'll still post about it I guess!

On August 23rd, Bell and Qwiksta were entered at Bong at a UKC hunt test. Qwik was entered in Started and needed 1 leg to finish her title. Bell was in Seasoned for the first time and I was WAY nervous about it and all the gun handling I had to do.

Qwik ran first on water. The Marks were short and she had to run all the way out to them cause the pond was low on water. There were plenty decoys and all that fun UKC stuff. Unfortunately Qwik broke a nail the week before and her nail was bothering her. She limped out to the bird...and limped back. If it was raw and bleeding I prolly would have pulled her. But it was just red and sore. I told her to suck it up and quit being such a sissy. She got her water birds fine. Had a bit of a hunt for her land birds but did good and passed. It wasn't pretty but it passed!!! So she earned her SHR. In UKC/HRC they douse you in cold water after you title. A few friends squirted me with water. I was fine with that...then these guys had coolers of well water that was ICE cold..BURRRR!!!!! But it was worth it. Every title I earn on the curly beast is a challenge and I work hard for every one! The legs don't come easy! 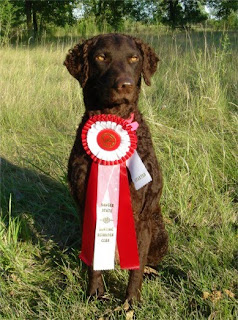 Here Qwik and I are with Jaci and Woodie. They both earned their SHR titles. 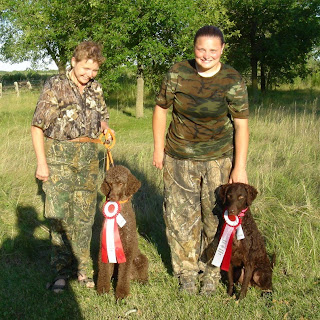 So onto Miss Bell. It started with a water series and she did great on everything but the water blind. I did awesome with the gun and didn't screw any of that up. She got lost on the water blind and quit listening to me and chased some frogs. dork. But her double was perfect and so was her walk up. In UKC you can still go onto the next series even if you fail the first one. Its awesome cause you paid the $$! She would have passed land if she hadn't have already failed on water. Her land work was great. Her land blind was kinda crappy. But passable. Shes such a good girl. We will have another shot at a leg in a few weeks.

It was a fun day and Bell really stepped up to the plate. I hope to make a bunch more HRC tests next year cause they test the handler as well as the dog. Cooooooooooool!
Posted by retrieverluvr at 7:45 PM