So I was entered at Bong at the Winnebago Labrador Retriever club trial last Saturday the 15th.

I had a wedding Friday night. My cousin Ross got married up in Neenah. Nice wedding n all. But I had to leave before all the fun started. I got home at 12:30am and was curling up in bed with the girls, when I peeked over at Qwik, who is all sprawled out on her back, legs spread wide open....her belly is completly covered in puss filled sores. She had a rash I had kept up on, and bathed in medicated shampoo the previous week. But this was FLAMIN red and all icky lookin. So, I haul out of bed and haul the curly dog into the tub and scrub her entire belly and armpits with medicated shampoo. gurrrr.

So ya know how dogs are after their baths...zoomin all over and compelty insane...yeah. At 1:30 at night, I am completly exhausted, I have this brown curly dog tearin up the house. She finally settles down and we wake up bright and early at 5:45 to head off to the hunt test by 6:15. sigh....what I do for my dogs.....

Bell was up first in Senior. I was VERY pleased with the test that was set up. Fairly straitforward. Simple double in a field with taller trees and bushes as a boundary. The go bird was the shot flyer right in your face, a breaking bird. We had to hold the wooden gun for it all too. The blind was the other way, towards a wide open field with 1 big bush....The blind was directly in front of the bush. I was perdy excited for it! I knew if Bell kept her thinking cap on, she could do it and with some style!

She was HIGH as a FRIGGIN KITE waiting in the blind....I ran and trained her Friday before the wedding...but she sat from 11am till 1am! Quite some time to build up for the crazy red dog. I got her to the line semi undercontrol. She marked the memory bird good and stared at it till they started quackin for the go bird. She sat like a champ, chomping at the bit for the word....."BELL!" and off she went frantincally trying to find the bird. She brought it back and lined up for the memory bird. She gave the bird up and glanced back to the flyer station then looked at the memory bird again.......I waited a second and said "Sit" and "Mark" again....."BELL!" and she ran around like a lunatic.............nowhere near where the bird fell.....then she proceded to go back to the flyer station....I sat her on the wistle and tried to handle her to the memory bird and she completly blew me off and ran around like crazy red dogs do. I asked the judge if I could call her in and he said "Yes, Please." not good.

I was bummed...She SOOOOO coulda done it!!! I really Really REALLY wanted to run that blind. Just to kinda see where my training was! Ohhh well. I learned alot by watching the other dogs run. Bell is SOOOO better than some of those dogs. She was steady as a rock with that flyer RIGHT in her face!!! It was sooooooo close to the line! And after I was leaving the line I rememberd what Kyle my field trainer had said when sending Miss Crazy red dog to the memory bird. "DEMAND she get it, don't ask, Use your tough trainer voice." And in training I do, so I don't get yelled at....And I was nervous at the test and just nicely released her. She needs that control or else she just looses her mind. Live and LEARN!!!

K so Miss Qwik was in Juniors. The Flyer was first up a small hill. She got that with a few seconds delay after finding it. The Dead bird was down a row of trees. Very simple. She circled it about 2 times and hung out by it and dawdled.....I was gonna KILL her! But she eventually got it and brought it back. HUGE releif! Land is her issue. The nasty birds the weekend before sure didn't help things at ALL!

Then onto water. It was friggin hot...I was exhausted....I just wanted to take a nap. I ran Bell as test dog for junior and she made me look super slick by chasing frogs instead of retrieving the first mark. dork. I coulda killed her. Anyways the first mark was across the runway pond, and it was supposed to land on shore on the grass. The winger was moving a lill bit and tossing them in the water...I woulda prefered that since someones dog is naughty on land........ But her bird landed on the land...She found it right away...LEFT IT THERE!!!!! and then went off sniffing and fartzin around. I was calling her and telling her to "get it" and stuff. Eventually she did and got the second bird like a champ. It landed in the open water. Even the judge said she was naughty! But she passed!!! YAY There was a photographer there and she took some cool shots! Ill post them when I get them from her. cool cool!!! 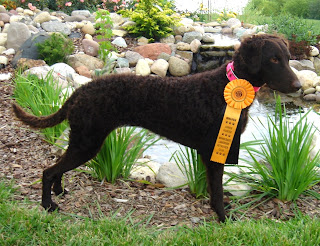 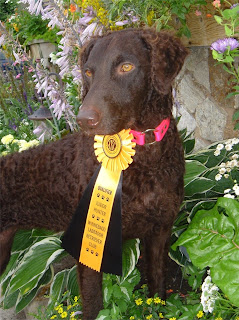 Qwik and Bell both earned their WCX at the Badger Golden Retriever Club test on 8-9-09! 13 were entered and 6 passed. 3 goldens, 1 curly, 1 toller and 1 flattie 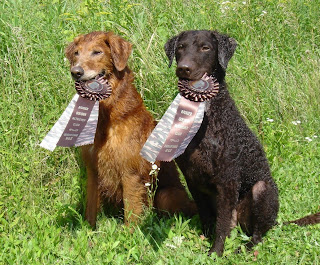 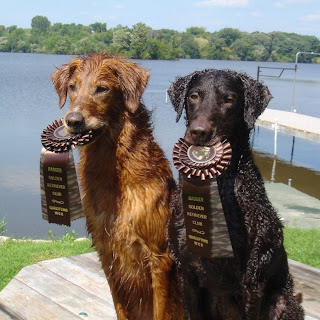 Bell passed with a slight bobble on land...she ALMOST switched back to an old fall after a decent hunt for the last bird....but she came through and went back to where she thought it was. There wasn't much wind to help her out. Very proud of the red dog. She was steady and listened to me and didn't whine or wimper at all! Even for her first official "test like" honor!! YAY!!! 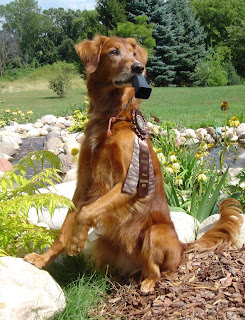 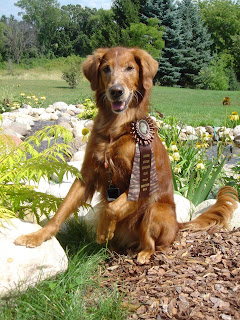 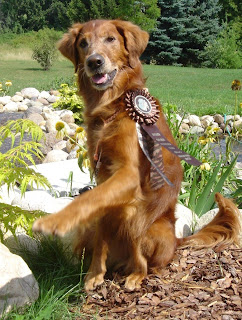 The Curly Coated Retriever Club has a slightly easier WCX test. The curlies are supposed to run a double on land and a double on water and the dog has to be steady also. Qwik failed earlier in the year at the Curly Coat National in St. Louis by not getting wet on the water retrieves. Anyways, when Qwik passed the Golden test...since it was harder than the Curly test she earned the title through the curly club!! Send in a form and it's official!

Even though the Curly beast was NAUGHTY she passed. She rolled on the two dead birds on the Land triple. I heard they used the ducks from the previous day and I doubt they were refrigerated or properly stored to prevent them from rotting. I was ticked!!! She hasn't done that since she was first introduced to ducks the beginning of last year! lill snot....I did NOT need that happening. She was steady even though the "go" bird on the water double startled her. They don't use duck calls before they toss the birds. They shoot the gun then toss the bird. She stood up cause she was focused on the memory bird but didn't break. She waited till I released her. Very proud of the girl.

I also had her entered in the WC for more practice. She already has that title. But she did great on it also...only rolled on one of the birds on land....she so NAUGHTY!!! 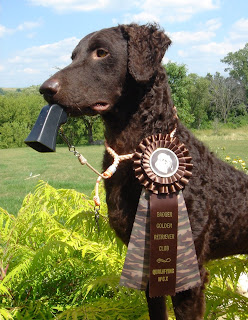 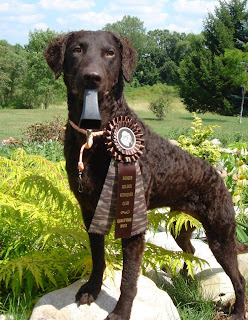 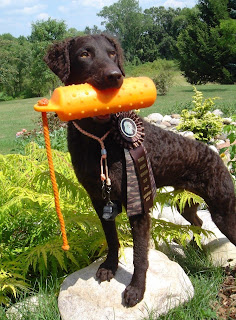 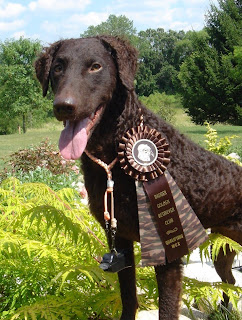 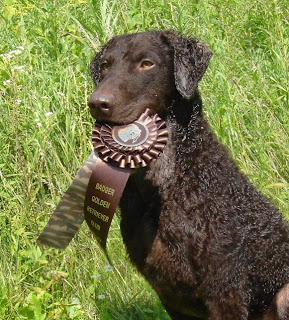 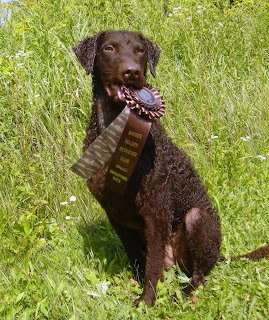