WWCDTC or as UKC know it, Bark River Dog Training Club, hosted a UKC Agility Trial. I had Bell entered in AG1 and AG2 Both rounds and she is going for UACH points. She has 10 points out of the 100 needed. Qwik was entered in AG2 both rounds. This was her first time entered in AG2 and needs 3 legs for the title. I also was running DeeDee the golden and she needed 1 more AG2 leg for her title then she would be going for points like Bell.

AG2 was first! DeeDee and Qwik Qualified and Qwik got first place! DeeDee had a few points off but did REALLY well and SMOKED the weave poles and teeter! She ran BEAUTIFUL and earned that last leg towards her UAG2 title!! Bell Droped a bar but ran really, really nice.

AG2 Round 2 was next Bell and Qwik Qualified with PERFECT scores. 1st and 2nd Place! Bell earned 10 more ACH points. DeeDee was missin weave poles so she just went for some fun!

AG1 round 2 was last and Bell and DeeDee both Q'd with PERFECT scores and they each got 10 more points towardes their UACH's! YAY

I was about to take our picture and then they announced the HIGH in Trial dogs and High Combined dogs. Bell got HIGH in Trial an HIGH combined for Trial 2!!! YAY 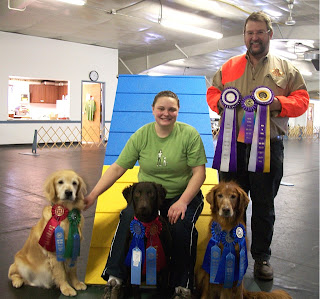 Posted by retrieverluvr at 8:09 AM