HEY! So yeah... I haven't updated in a while. too busy.
But here is the lowdown!

We redid the dock on the 14th of June and it is super schnazzy! It was a royal pain in the butt to rip off all the old boards and rusty screws. But it is great now!!! Hopefully we will be able to make it to a dock dog event or two in the future! Bell is jumping great and Qwik is getting the hang of jumping up and has tried some EV too!! If we don't do well at a dock jumping event it isn't from lack of training or lack of a great place to train! 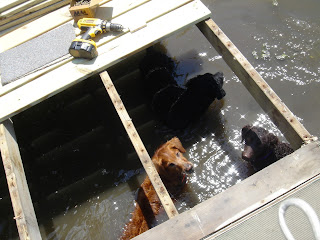 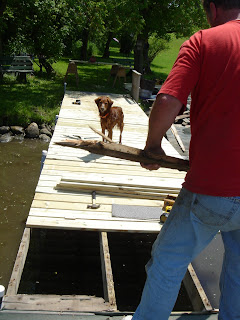 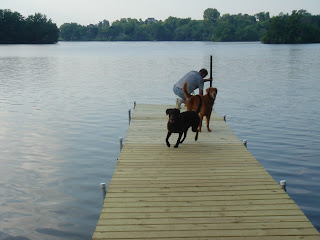 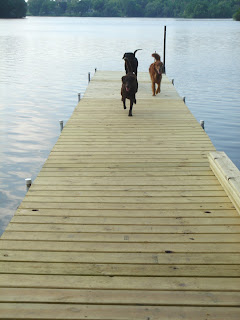 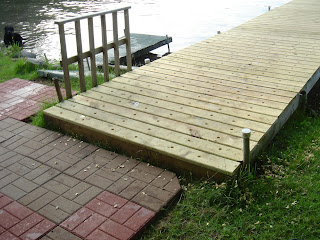 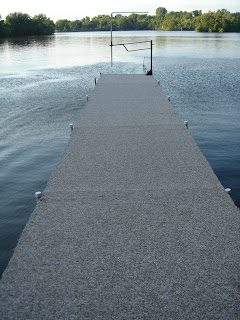 The weekend of the 20th n 21st. Qwik made her Novice Obedience Debut. She was a good girl the first day and earned a CD leg and a first place! She had an OK score and was good...not the lill perfect girl I get in training, but good enough. The next day she blew a 198 by laying down on the long sit at like 59 seconds. She was a VERY good girl heeling and paying super good attention. I was very proud of her even though she NQ'd. Bell got a few OTCh points at the show but nothing too big to brag about. Her attitude is kinda lackluster lately....I think she is sick of Obedience. She can work nice when she wants too. But as soon as I unclip her leash in a "real" ring she is a poop turd...:) Qwik earned two RE legs this weekend too! This was a Poodle Specialty and everyone thought Qwik needs to grow a topknot and a pom on her tail!

The weekend of the 27th n 28th we did Obedience at the Washington County Fairpark. Qwik earned 2 RE legs and finished her title on Saturday. Sunday she Q'd but with some retrieverismmmmsss. On the Off-set Figure 8 there was 2 toys in food bowls on the floor, and she picked one of them up even though I was telling her to heel and trying to keep her attention up. silly retrievers....But she Q'd anyways being the cute girl she is. She also earned another CD leg on Saturday with a crappy score. She wasn't focused....she was bumping me alot and lagging then bumping and forging. I just have to figure her out! But Sunday she impressed me in Novice by heeling like a super girl! She had a 199 going into the Recall and she didn't come the first time I called her...NQ. But all that showed was that the sit stay training we did the preveious week worked! YAY! So I know the girl has the potential. Bell got a placement but no points. Even though I had Icecream she was being a poop. gurrrrrr But I think the Icecream made a lill dent in her crap attitude. Hopefully she will remember it for future shows!!!

I have one more Obedience show before I break for field the rest of the summer. I will keep training for Obedience but not as hard core as before. Bell earned enough OTCH points to keep me hopefull...but I wish she was farther along. I don't know if I will continue to push her...She has come a long way and we have had a buncha fun working towards it. But if it dosen't happen, it's not a big deal. Miss Qwik needs to get to some more Novice Obedience shows. I want her to get consistant and I want to figure out the girl as far as warming up goes. She sometimes is focused strait outa the crate...where other times she needs lotsa refreshers outside the ring. I just want her to get the game, a lill more, before I really train for Open. And I do want to get her average score up to try for the Top Obedience Curly of the year!!! :)
Posted by retrieverluvr at 8:27 PM