9-26 & 9-27
SO! I was in search of Qwik last 2 legs needed for her Junior Hunter Title. A friend through curlies had mentioned that there was a Double Junior Test, the end of September, in Ohio, and that I could stay at her house if needed. I gave it a thought then checked my schedule at work, and I didn't have many dogs booked! I promplty rescheduled them and made plans to drive to Eastern Ohio to hopefully get those last 2 legs. I also entered Bell in Senior for another shot at that.

We trained Thursday night at Kyle's place with the 2 ducks I was keeping in a crate. MAN O MAN are ducks gross!!! Anyways, I had my dad come out, and we got some pictures of the dogs retriveing the fully feather ducks...unlike our usuall training ducks who many lack a few feathers. 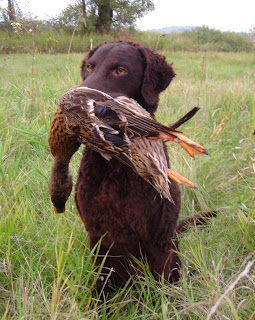 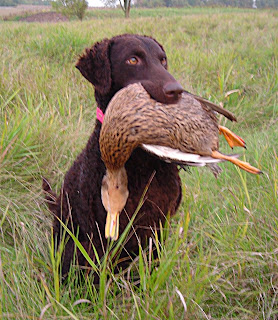 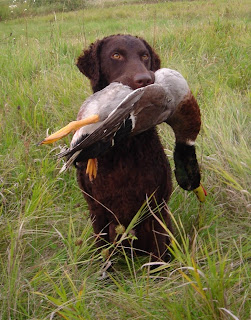 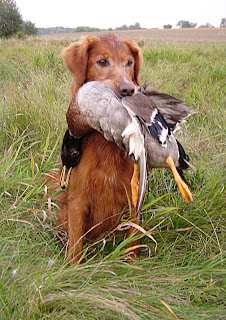 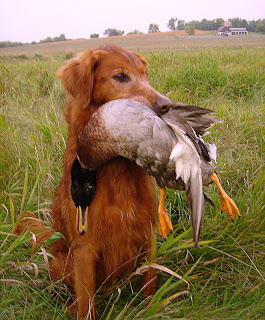 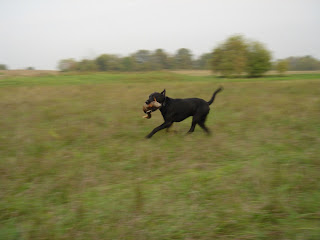 This is Toby. Hes the lab we train with. Hes a good boy and got his JH in 4 strait tries!!! Unlike the lill curly! 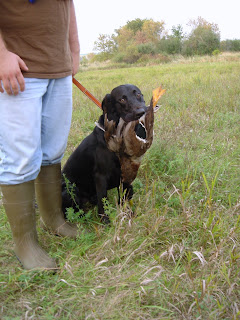 So after that training session the dogs were pumped. We left Friday morning after I groomed a few dogs. I made it there in a little over 9 hours. CHICAGO SUCKED!!!! Once I got past there it was smooth sailing.

Once I got there, I unpacked my crap, settled the dogs and we went out to dinner at Smokey Bones. YUMO!!! GREAT choice I must say. Dawn, joined us later...The "us" was Sief, Dawns boyfriend, and Monna from Finland, who was picking up her curly puppy and flying back to Finland with him!

Saturday Morning we got to the test and it was sunny......then it got dark and rained. urgggggggg. Land was first for Miss Qwik, and she did PERFECT! Out and back, and super fast. She did excellent. I was sooo super proud of her. The marks weren't all that easy either. Lots of dogs were failing. Water was next and the rain continued....urggggg. Bell got to be test dog and she throughly enjoyed that. She also got to pick up a few birds that the dogs didn't get. She was SOO happy to be of Service. Qwik ran later in the running order and it was still cool and rainy. When it was her turn she was all pumped. The duck call quacked, and the shot rang out, and the duck splashed into the water...I released her and she didn't jump in.........she fartzed around on the waters edge. Then she tried to run out to it, but you really couldn't get out their easily by foot. Then she just stoped and started eating grass.....I was TICKED!

I quietly took her back to the car and told her how naughty that was once we got there. Then we went to the pond that was next to where we were parked. I sent her into the water and she no-go'd...AHHH HA! I laied into her that we do NOT do that! I set her up and sent her again. She BLASTED into the water. I tossed a bumper out in front of her. I had her on a Flexi leash and she coudn't reach the bumper. So I reeled her back in and told her again how naughty she was for not getting the bumper. Then I uncliped her and sent her in. She hit the water like a ton of bricks. I HOPE that proved a point to her. I was VERY disapointed in the girl. We had done lots of water work at training before we left. But her reasons were....it was cool and rainy, the bird thrower was hand tossing the birds and we are used to wingers tossing those birds way up and making a nice big splash in training. So I can sorta see her point. "But, when I ask you to get into the water, and get a bird, like I KNOW you KNOW how to do, I expect you do it! DARLING!!!!!!"

After we came home and dried off, Seif made the most AMAZING meal. It was Curry Chicken, Beans and Rice, and some Roasted veggies. YUMMMM AWESOME! We hung out and chatted then headed off to bed.

Sunday I was all pumped for. Bell was up first in Senior on Land. It was a Walkup Double that was the same marks we ran in Junior just as a double instead of singles. Do-able. Then a Blind into a field cut full of Strips(it kinda scared me). Then an Honor. Bell did GREAT on her marks. I was worried about her blind but she ALMOST Lined it!!! She ran a GREAT line out there, and then started drifting to the left of it. I sat her and casted her back to it. She was right on top of it but couldn't pin point it. She started to hunt bigger and bigger, so I had to handle her again back to it and she kinda blew me off, but came up with it. As I left the blind line and went to Honor, the Guy Judge said "I'm Sorry." I thought to myself "REALLY!!! Was it that bad!" I got her leash, and my coat, and settled down as they rebirded before the next dog ran. Once they were ready, the female judge came over to me, and said to get ready for the honor. I just told Bell to stay. Then she said..."Take your leash off." I promply did!!! If you honor on leash it means you failed. So I was SOOOO confused. The guy judge must have said "I'm Sorry" cause they had to rebird...but his timing wasn't the greatest!!! I was flip floppin all over! EEK!!! But she was called back to water. :-)

Qwiks land series was next. She did FLIPPIN PHENOMONAL!!! The best she has ever done. Running out and back and PINNIN her marks. GOOD GIRL! I rewarded her with a quick swim in the pond behind the parking area. Little did she know I also was refreshing her to GETTING IN THE WATER!!! YAY


Lunch Break Pictures. The lill liver curly is Olive. Qwiks 3/4ths sister's puppy. Dawn would NOT let me take her home...she's so mean!!! 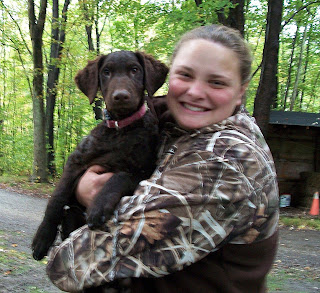 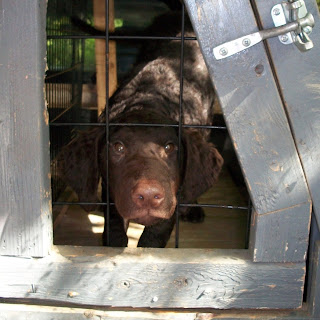 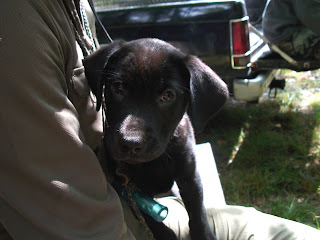 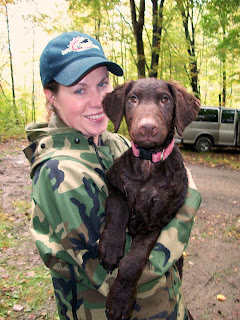 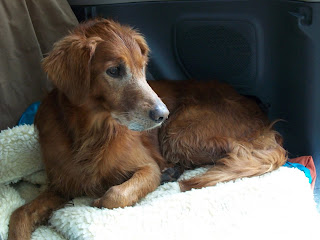 Bell ran Water next. It took FOREVER to set up the test. The double was do-able and shorter than some of the marks we have run. The Memory bird was along all these stumps but still in open swimming water. The Go bird was across the pond and up on Shore on this hill. Kinda tough. A few dogs gave up and switched to the Memory bird. Bell did awesome. The blind was an angle across, and past 2 points of land. One area was swampy grass and the other was a little island. I sent her back, and she took a great line. Then she started drifting to the left a little bit. I sat her and casted her back to the right and she took a PERFECT line all the way back to it, and picked it up, and brought it in. I was about to start doing cartwheels!!!!!!!!!!! YAY YAY YAY YAY I got some great compliments from the judges and they even said to each other as I left "Did we make this too easy???" As I walked away I said to myself..."No me and my dog are just THAT GOOD!!! We made it look that easy!" LMAO!!!

Onto Water with Qwik......The marks were short and in open swimming water. PERFECT for the lill girl! It's when they land on land, that we have issues. She did GREAT! Pinned both marks and dove in on the first command and brought them right to my side and was good. YAY for the Beans. One of the judges even gave her perfect 10's all the way around! YOWZA!!! I was ticked that one day can go so good, and the other so bad.....Ohhhhh Well!

I would go back in a heartbeat!!! I had a GREAT time! 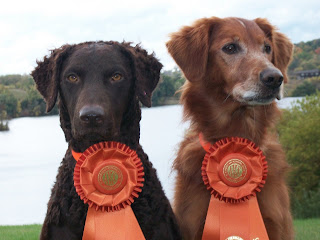 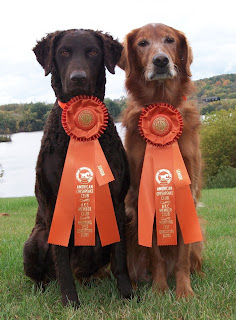 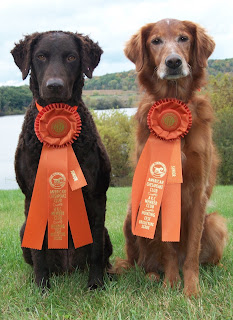 Posted by retrieverluvr at 9:43 PM