So we had our fall Agility trial at the club this past weekend. It was a 3 day trial with Friday being the Excellent JWW and Std classes and ALL levels of Fast. Saturday and Sunday was everything including fast. I was in charge of Ribbons and Prizes again. My favorite job! But I did fill in where needed outside if I wasn't running around with my head cut off.

I ran Qwik, Bell, Casey(Yvonnes girl) and DeeDee who is a golden in my classes at the club. Her owner is older and has a hard time keeping up to the dog and she runs well for me.

Friday started out WET, RAINY and WINDY! YUCK! We had Jumpers set up in a river....so we ended up moving the entire ring forward. Talk about a Pain in the Butt!! Bell was in ExB Jumpers and ExA Std and Novice Fast. She Q'd 3 fer 3. Earned her MXJ, and Novice Fast title! The Excellent Std leg she earned was her first AX leg and also first time EVER in Excellent Standard! YAY for the red dog!!!

Casey, Qwik and DeeDee were in Novice fast and they all were naughty/silly/unfocused. So we just had some fun out there! ohhh well.........

Saturday started off windy and cloudy and ended up sunny! It was a werid day. The ground dried off overnight thank goodness......

Bell was in ExB JWW and ExA Std and I moved her up to Open FAST. She Q'd in JWW and STD, earning her SECOND leg towards her AX. She took the wrong side of the tunnel in Fast like a silly dog...gurrrr But she ran really nice!

Qwik was in Novice JWW & Fast and Open Standard. She is not near ready to me moved up in ANY level but I thought it would give ME some more breathing room running the 4 dogs. She ended up Q'ing in Open Standard! She just had one refusal at the weaves, and did the 12 set BEAUTIFULLY!!!! I have only been working 6's with her lately! She had more focus than she has had in the past. She NAILED a 6 set of weaves way out ahead of me though! PROGRESS!!!

Casey tried real hard and almost had a Q in JWW and STD. She went off course in JWW and had a PERFECT run in Std but knocked the last bar which was a double. She had some VERY nice stuff going on though

DeeDee was kinda naughty for me. She bailed on the teeter right above the yellow...ALMOST! She isn't real confident on it yet. Especially outside. She ran OK in the other classes and ALMOST passed Fast. Her time in JWW was over cause she kept going around jumps. But we had some good bonding time!!!

Sunday was a BEAUTIFUL day! It was picture perfect. Sunny but cool. LOVE IT!!!!!

I am giving trying for a MACH a thought. She is 8. She is very consistant and just needs a little maintence on weaves and contacts. Turning tight and not pulling off jumps are her main issue I think....I think it is doable....but I dono if I wanna do it. I will get her NADAC NATCH. She is like 10 Q's away from that. I would LOVE to get a OTCh...but thats a WHOLE HECK of alot of work......And this summer I am gonna push for her Senior Hunter and HRC/UKC field titles. decisions decisons............

Qwik ran nice for me. Her Jumpers run was the best I thought. I haven't been really using handling skills on the Novice girls......I just kinda throw them into open space and slopily change sides. I worked on rear crosses with Qwik...but I know she is just starting to understand them. But I thought what the heck I'll give it a shot cause it ain't like she is going for a title or anything. I did 2 of them and she read them nicely and drove ahead of me and turned the correct direction!!! I was sooo excited!!! She ended up with a Q in JWW. She got called on her a-frame contacts in fast...I gotta train that dog....in Std she was a bit unfocused...but did some good stuff.

Casey earned her NA and NAJ!!!! She was such a good girl. She is so fast and focused when she isn't all nervous about everything. She gave me a scare in Fast. She always has a very flashy a frame. She leaps the apex and does a nice running bottom. Well she lept over the top of the a frame and landed on the ground next to it! I was like ummm......lets try that again girlie. She did it perfect the second time. Silly girl! Alissa from Pet-Personalities.com was there and got a few awesome shots of the guys. She got this one of Casey on Friday and I ordered the rest. They should be here soon. 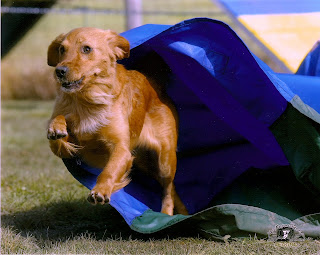 DeeDee ran MUCH better for me and got a Fast leg. In Std she ran PERFECT except for putting all 4 feet on the teeter and bailing....ALMOST! But everything else was great. She also ran great in Jumpers and Q'd there too!!! YAY for her!

I was totally exhausted running 4 dogs but it was a fun weekend. 5 titles aint bad!!! 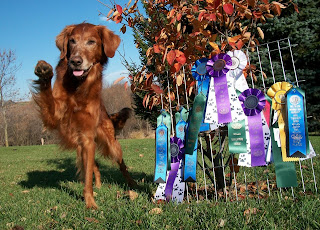 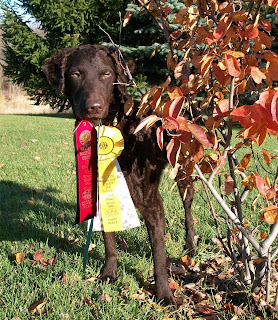 Posted by retrieverluvr at 9:14 AM